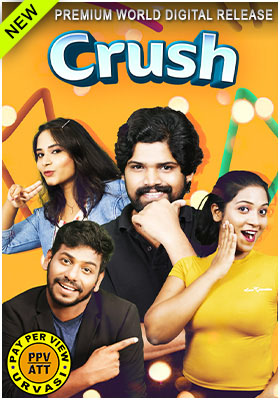 Ashok Vardhan smashes his phone while drunk. He searches for a new phone in OLX to buy a second hand phone. He meets Bindhu who puts her phone for sale.Ashok has a crush on Bindhu when they meet regarding the phone. Meanwhile, Abhay also has a crush on Bindhu after seeing her at the hotel. Abhay finds Bindhu's address with the help of his mimicry friend Ravi in order to meet Bindhu. Ashok also with an excuse of phone repair meets Bindhu at the repair shop.Ashok goes to attend an interview for a vacancy in the TV channel where he has a crush on Priya who is the HR. Abhay makes an excuse to teach mimicry to Bindhu's brother and go home and Bindhu also has a crush on Abhay.After seeing Ashok perform in the show Priya has a crush on Ashok. In an unexpected situation Abhay meets Priya and comes to discover that Priya is a big fan for his work and permission to come to shoot along with Abhay.There is a song sequence between Abhay & Priya, Abhay & Bindhu, Ashok & Bindhu and Ashok & Priya. This is followed by a gang plan.Bindhu goes to the temple for work and Pushpa comes to spy without Bindhu’s knowledge. At the same time, RK comes to the temple to spy on Ashok. But in an unexpected turn of events they get married.The promise made by Bindhu’s father to his wife about Bindhu being married to her brother’s son, Ashok’s mother asking him to marry the girl she chose for him and Priya going to the US. What unfolds is a mystery.