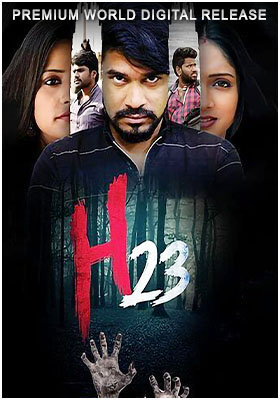 A person by named Narayna wants to sell his house (H23) for doing his daughters marriage purpose. His daughter is Sailaja (Heroine). But there is a rumor in the surrounds that there are devils in that house. Krishna (Hero) a Mechanic, tries to buy that house. Narayana intends to sell that house to 50 Lakhs rupees. But Mechanic Krishna wants to buy it for 25 Lakhs Rupees. Broker of both parties tells Krishna to impress Sailaja who was daughter of Narayana to buy the house. In the process, Krishna meets Sailaja and asks to buy the house for lesser amount, by telling her that house is a Devil house. Sailaja keeps a condition to sell the house. As per the condition he has to bring her a groom who does not take dowry for marriage with her. In the process he brings Errababu near Sailaja for the marriage. Sailaja asks Errababu to come to H23 house in the night. Errababu goes in to the house and Devils fears him. Errababu escapes from there. Later Krishna goes near Narayana, and tells him that it was a Devil house and advises to do marriage of Sailaja. Later Krishna reveals his friend Maruthi that there are no Devils in the house and he is making that house as Devil house with help of his friend by making different activities. By the time he is telling this to his friend, Sailaja comes and heard it. Later she scolds him and tells him that she would be single without marriage, but she can’t allow him to buy that house. With this Krishna realizes his mistake. He want to prove that there are no devils in the house. He sends a person by name Gambheeram as Tenant of the house. But Devils harasses Gambheeram. Later in the morning Gambheeram tells all the people who gathered there about the Devils. Narayana worrying about the House and he met with an accident. Later Broker comes near Krishna and tells about Narayana accident and tells Sailaja’s decision to sell the house for lower price for the treatment of her father. Krishna thinks that is not correct and sells his mechanic garage and gives that money and his savings also to Narayana’s treatment. In the process, Sailja likes him and marries him. Both starts living in the house H23 House. In their first night Krishna observes some sounds from the house and notices that there are devils in the house. Film concludes on Saialaja and Krishna shocks after knowing about the Devils in the house