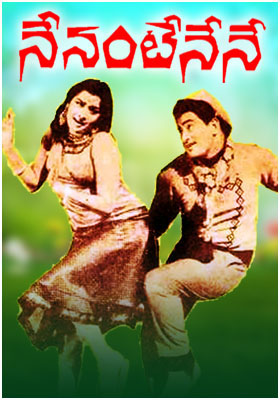 Nenante Nene (1967) . A remake of Tamil Film Naan. Directed by V. Ramachandra Rao & Produced by P. N. Babji under Sujatha Films. Dialogues: Bhamidipati Radhakrishna, Plot: Rajkumar (Chandramohan) is the son of the Raja of Rangapuram. Annoyed by his father's feudalistic attitude, he flees to Rangoon where he is raised by a woman named Kamakshi. Years later, before dying, the Raja gives the job of finding his lost son to his three friends and his diwan (Ravi Kondalarao), along with clues for identifying him. Three men ? Anand (Krishnamraju), Ravi (Krishna)and Bhushanam (Nagabhushanam) ? arrive at the Raja's palace and claim to be Rajkumar, seeking rights to the Raja's properties. Kamakshi is brought in to identify the real Rajkumar. Under duress, she testifies to her own son Anand as Rajkumar. Meanwhile, Ravi falls in love with Geetha(Kanchana), the diwan's daughter. It is later revealed that Bhushanam is a CID officer trying to capture an underworld don who Anand works for. Ravi enacts a drama to save the real Rajkumar, who is in love with Ravi's sister Sarala. The film ends with Rajkumar being rescued and the culprits captured. Trivia : Krishnam Raju was initially reluctant to play the negative role of Anand, having debuted in a heroic role in Chilaka Gorinka (1966), until Babji's brother Doondy advised him to accept the role as he needed to portray diverse characters to build a career in cinema. After industry elders and Krishnam Raju's friends, including cast member Krishna shared this view, he accepted the role in This film. Very Good Songs to listen and watch. It's a commercially successful movie.