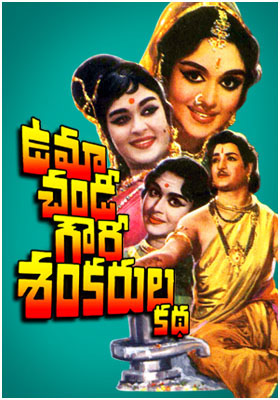 ??? ???? ???? ?????? ?? Direction & Story , Screen Play : K. V. Reddy Producer: Chakrapani & Nagi Reddy Starring N. T. Rama Rao, B. Saroja Devi, Relangi, Ramana Reddy, Dhulipalla, Padmanabham, Mukkamala Music: Pendyala Nageswara Rao Production company : Vijaya Productions Release date : 11 January 1968 Language Telugu Plot : In a debate among Saptarishis where Bhrigu Maharshi argues that the male is responsible for the entire nature and others say nature (female) is the origin of the universe. Bhrigu wanted to clarify his doubt with Shiva. Upon reaching Kailasa, Shiva would be teaching lessons on dance to Goddess Parvati and since they were in the process, he would be ignored by Parvati and Shiva. Losing patience, Bhrigu curses Parvati to take birth three times on Earth and suffer from human-related misfortune. Parvati also curses Bhrigu to take birth as a demon who makes mankind suffer. Parvati, upon praying to Shiva, receives the favor, that She would take birth only one time, but as triplets and He will take birth to protect her and convert Her human-related misfortune into a boon with His company. The crux of story is all about how Shiva meets these three women and how He assassinates the demon (Bhrigu). At the climax, Shiva fights the demon (Bhrigu) and releases him from the curse and at the same time Paravati also gets released from all Her human suffering, turns into a Goddess and reaches Lord Shiva.